‘The River of Hope’

I arrived in Tumen the day of the festival, so a little jet-lagged I attended meetings and prepared for the evenings performance; The opening ceremony. There was a Korean pop star (currently at number 1) as well as traditional music and dance from Russia, Korea, Malaysia and of course China. 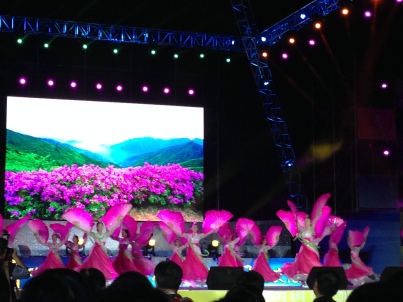 The whole of the city of Tumen seemed to turn out as audience members, as well as people travelling for the event, which was completely sold out. There were all ages in the audience of roughly 3000. 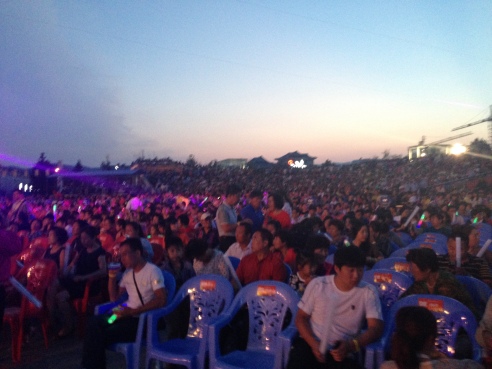 The opening ceremony was really vibrant and I could feel the excitement of the whole city coming together to celebrate. Everybody seemed to be delighted and there were lights every where. I have to admit I felt a bit overwhelmed that I was going to be choreographing for the closing ceremony! Especially since I would be working with Chinese children that I was yet to meet!

I had 6 classes of 35 Chinese Children aged 12-16. I had two translators to help with these classes (thank goodness!!). I had prepared classes with creative tasks as well as choreographed movement phrases. I had hoped that the tasks would stimulate some movement that could be used in the final piece.

However…… I had not taken into account the lack of emphasis on creativity in the Chinese Education system. Thus meaning the children would physically just stand still silently, unable to move a muscle, when asked to produce a movement of any kind. They couldn’t give me a movement to their name or add on any moves to a sequence. However they were very good at copying movement and trying to do it as precisely as possible, even if they did struggle with musicality and rhythm. The kids were very intelligent in other ways and copied every move perfectly. They were also extremely well behaved.

It really made me realise how lucky we are in Britain to have creativity and the arts being taught in our education system (although I must admit- having worked in both London and Scotland, it seems London is far ahead on the sheer volume and acceptance of an art such as dance being part of the curriculum). I also found that the girls were very shy. Apparently this is because girls specifically are taught be quiet in school.

I finally did get some creativity out of them, and this really allowed me to see who I should select for the piece. Most of the cheeky boys made the cut! 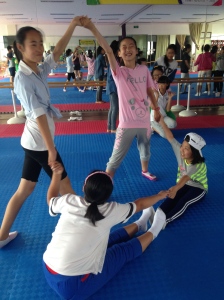 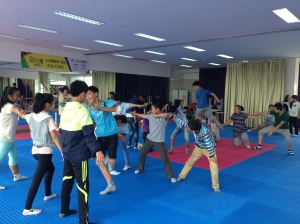 I chose 16 children, with 12 making all rehearsals. And we began putting choreography together. I choreographed a lot of the material, selecting those to perform which routines they delivered the best. 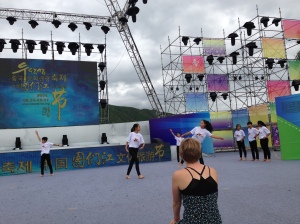 We had three days to rehearse together, which did not feel enough for a performance with audience of 3000 and live TV coverage across the whole of China. However, we made it! The piece was to contemporary Scottish folk music and had movements inspired by the Scottish highlands scenery of mountains, cliffs and sea. I performed a solo as part of the piece. 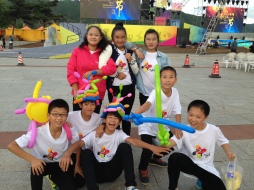 What a challenge it was to create a piece for live Chinese television in such a short period of time with no shared experience and no shared language. But we did it!! Hooray! And boy could I not wait to get home, what a tremendous experience, but I think I’ll be giving noodles a rest for a while now!

Well China, you certainly challenged me…….